Skip to content
HomeThe Devil is in the Details: Ep 1 of Shield Hero vs Manga 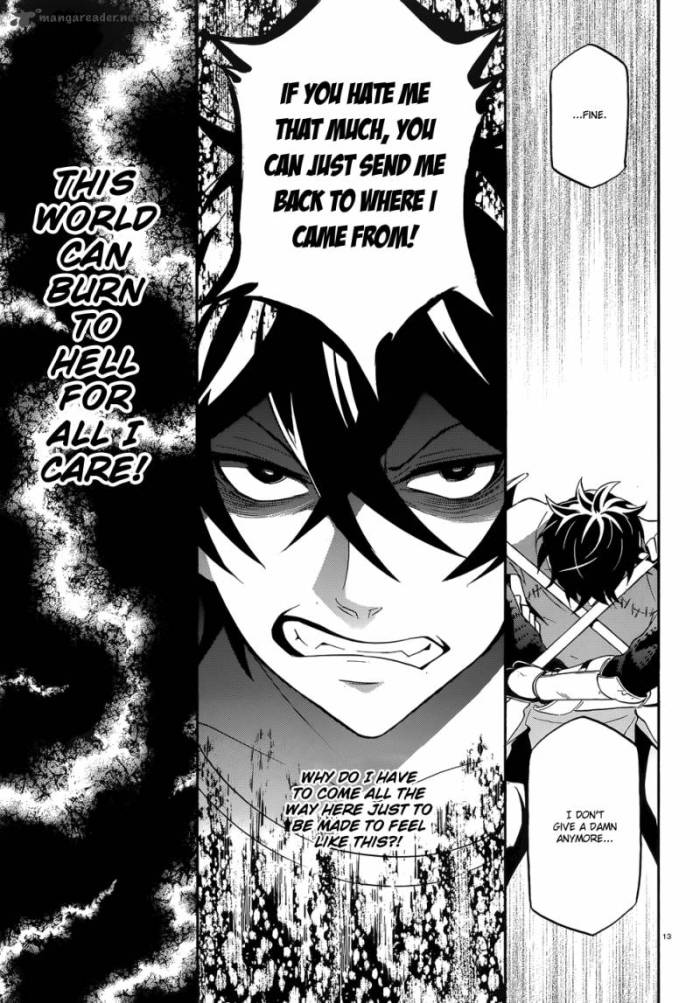 Yes, I know what you’re thinking.  Why the fuck am I comparing the manga adaptation of a light novel to the anime adaptation of a light novel instead of going back to the source material?  Simple, I don’t read light novels so the manga is the only other thing I have to go on.  More to the point I quite like the manga and some of the differences between how it’s chapters were handled as compared to episode 1 of the anime are noteworthy enough to mention in terms of how to write and direct scripts and their relevant scenes.  There will spoilers for episode 1 and the corresponding manga chapters only.

For those who’ve not seen the episode nor read the manga, here’s a brief explanation.  Naofumi is warped from Japan into another world via a fantasy novel he starts reading.  When arrives he finds that 3 other Japanese boys of roughly the same age range have been summoned as well to save a fantasy kingdom from the incoming wave of monsters.  All of four Japanese boys, the 4 Heroes, are locked into using a sacred weapon and in Naofumi’s case it is a tiny shield.  They are then given companions so they can go out in separate groups and level up from the coming wave.  For reasons he doesn’t know Naofumi is discriminated against very early on by the upper crust of the fantasy kingdom and he is falsely accused of rape by his only companion and is cast out in shame in short order.  From there he will have to find his own way.

The main difference between anime and manga thus far are the degrees of extremity.  The manga is much more heavy handed in regards to the condemnation of Naofumi, our titular Shield Hero.  The discrimination against him is both more blatant and the details justifying any of it are scant.  By comparison, in the anime there much more mild discrimination against him until the rape charge and most of it has some circumstantial evidence to justify itself on, like the fact the other Heroes seem more familiar with the mechanics of this world because they experienced gamers.  Likewise the manga frames Naofumi as an actual rapist whereas the anime makes his crime an attempted rape.

By and large I like that the anime added extra details.  The kingdom spying on the Heroes to find out about Naofumi’s lack of knowledge, which they then use as a pretext for not helping him is n especially good touch. But there other details which do add to the experience as well.  In the manga it is not spelled out until much later that the fantasy kingdom holds women in higher regard than men, while that is made clear in episode 1 of the anime.  This is important because it means the punishment for Naofumi is heavier and that his accuser’s claim is given more weight.  Having the guards plant a torn nightgown was also an excellent touch as it makes the overwhelming shift of everyone condemning the Shield Hero more believable.  Perhaps most important though, the anime establishes that the other Heroes not only come from different Japans (i.e. worlds/times/realities) but it showcases some of their weakness of character from the beginning without making them assholes.

One of the weaker parts of manga was that the other Heroes, who otherwise lacked any apparent flaws, were so condescending to Naofumi from the beginning, it did make his hate more justified but all the same it was almost cartoony in just how heavy handed it was.   By contrast in the anime the other Heroes have more entitled attitudes, as later manga chapters would detail, right from the beginning but they are not total dicks to Naofumi until the false rape charge.  They might tease him a little because he was stuck with the shield or doesn’t have as strong a grasp on RPG mechanics but on the whole they treat him as one of the guys.  And while that obviously shifts when they believe the quite believable – in the anime – rape charge, it does make the other Heroes stronger characters, with more nuance, adaptability and true to life behaviors and attitudes.

That said I vastly prefer the extremity of Naofumi’s response in the manga.  In the anime he gets pissed and wants to leave, and when the fantasy king explains that he can’t until the 4 Heroes defeat all the waves, he says ‘fine I’ll fight the waves on my own/my own way.’  In the manga his hatred of the fantasy kingdom post-rape accusation is much more pronounced, he says to himself ‘this world can burn for all I care’ and laughs when he finds out that the other Heroes are stuck with him before storming off to do things his own way.  I felt that Naofumi’s reaction in the manga was way more appropriate considering the false rape claim and the fact that word of his crime was spread throughout the kingdom.  Moreover the way the manga leans so hard into his anger and bitterness, in his dialogue, attitude and in the artwork, was what really caught my attention.

There are also a few edits which baffle me.  The worst is that when Naofumi first wakes up he looks like he fell asleep playing a goddamn MMORPG, whose mechanics he is later shown to have virtually no grasp of.  In the manga he described himself as an otaku who didn’t play games and his exposure to this world was from a book while the other Heroes were sucked via their respective games.  This is super important especially in the anime which bases a number of it’s best changes on the conceit that Naofumi didn’t know things the other Heroes did, in this case RPG mechanics.  Given that, why in the fuck would ANYONE ok a scene where he’s playing any kind of game at all, let alone one which looks the part of an RPG or MMORPG?  Setting that blunder aside I thought the merchant scenes were clumsy.  In the anime Naofumi sells worthless monster drops to a merchant who tries to screw him, pulls his own fast one on the merchant and then sells healing herbs without a problem.  In the manga they forgo the monster drops and have Naofumi sell the herbs to the merchants who tries to screw him before Naofumi pulls his fast one on the shady merchant.  It just seems so much more elegant in the manga and more efficient as well.

All told I think Shield Hero got off to a strong start with mostly good changes from the manga, though I worry the anime will not lean into Naofumi’s bitterness and rage hard enough if episode 1 is anything to go by.  I do hope I’m wrong on that count though. Thank you for reading and I’ll see you in the next one.