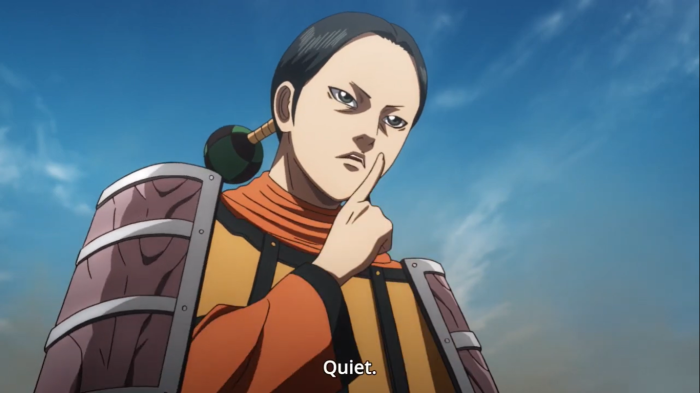 After giving Kingdom 3 a few episodes to really get in its full swing, I figured it was time to discuss my initial impressions and how closely they matched the episodes as they’ve come out. If you want to look at the first impressions before getting started, it’s linked here.

Ever since I was aware that Kingdom 3 was coming out, i.e. a few days before the new season started, I’ve been slowly re-watching the first two seasons. I’m currently in the early stages of season 2 and sadly it has already confirmed my biggest concern regarding Kingdom 3 – the audio. For starters the audio seems quieter across the board, I have no idea if this is a recording issue, a source rip issue or what but seasons 1 & 2 are significantly louder at the same computer volume, especially the soundtrack. Which leads me to major problem two, the audio balancing. The soundtrack of Kingdom 3 is so quiet that I keep forgetting it’s even there and have to re-watch episodes with extra attention given to listening for the music to even try and identify and remember it.

Because even when the tracks pick up a bit to reflect the intensity of the battles and such, they are frankly completely overpowered by the sounds of the action. A great example is the Qin charge at the start of episode 4/ end of episode 3. There is a decent, tense battle track playing during the charge but fuck me it so hard to hear over the noise generated by the damn charge.  The earlier seasons were not like this at all. The music was just as immense as the charging noises and you literally can’t miss the soundtrack regardless of what’s happening on screen. The only time Kingdom 1 & 2 are quiet is when there is no music and no action or dialogue. This is a gigantic failing because as I’ve detail over the course of multiple posts, the audio of Kingdom is what really makes the anime worth it. There is nothing in the anime you can’t get in the manga besides color (a nice touch but not essential), movement (let’s face it Kingdom’s animation is extremely inconsistent with large stretches where it looks great and equally large stretches where it some of the ugliest animation ever put to film) and sound.  And sound was where the anime shined the most. The voice-acting was amazing, the soundtrack sounded like a good approximation of period appropriate and it was epic enough to match a story with scale and scope of Kingdom – the unification of China with battles a hundred thousand strong.

Moving right along, though if you can find the focus to listen to the quite-ass soundtrack of Kingdom 3 it is in fact noticeably Sawano’ed. Now I like Sawano’s work but his predilection for electronic sound, especially for tension builds, just does not mesh with the setting and character of Kingdom at all. I’m hoping that when we get to the really big moments the music will improve somewhat but it’s honestly really disappointing that the soundtrack is so different from the earlier seasons. Kingdom 1 & 2 were so unique when it came to sound, I’ve never come across any anime that sounds like it and the music choices were so much better reflective of the story’s location and time period. Listening to the soundtrack of earlier seasons of Kingdom alternatively brings a big old smile to my face or makes my hair stand on end.  It’s iconic and gave Kingdom such a distinct character, and watching all the seasons of Kingdom simultaneously, I think that character came as a result of the love poured into Kingdom by the creative teams of the first two seasons, which had way more overlap than either team has with the new team.

Now far be it from me to claim Kingdom 3 is a cynical cash-grab, it’s nowhere near bad enough to merit that label, but I do think it’s safe to assume Sawano was chosen to do the soundtrack for Season 3 because it was seen as a “safe” move from the corporate end of productions.  That because the man is individually very popular and has a good track record, putting him on the job would make the show more marketable to people in the know.  And not to knock Sawano too much, again I love his work on other shows, but I think he made a significant mistake to let his usual style dominate the composition rather than leaning on the soundtracks of the earlier seasons – like at least use them as an inspiration or something. Maybe the soundtracks will improve as things go on but I do not have high hopes on this front.

Last but not least the voice-acting is, well I want to say abysmal but I mean abysmal compared to Kingdom 1 & 2, overall it’s more like passable.  Minor characters being voiced by different people is annoying if inevitable but far more jarring is the drop in quality by the major players – all of whom have the same voice actors.  Again no idea if this is a recording issues, source rip issue or a directing issue, but almost everyone sounds worse than before.

The calmer strategist types tend to be minimally affected if they even sound worse at all but any character with a louder, more extreme personality and character is basically fucked.  Even Xin has taken a big hit here, with his yelling sounding somehow quieter and yet more grating than it was in earlier seasons.  Huan Yi, Wan Ji, Biao Gong, Lu Buwei and newcomer Ordo all have been it very bad.  I feel like this has to at least partially come from an audio recording/balancing problem because these characters in particular sound quieter and less full than they should.  Go back to the earlier seasons and listen to Huan Yi, Wan Ji, Biao Gong or Lu Buwei for a bit and see what I mean, as for Ordo I would use Lian Po as a point of reference for what Ordo should sound like. And listening to the banter between the two main harem girls is very eye-opening, it’s like night and day between Kingdom 2 and Kingdom 3, with the new season sounding seriously inferior.  I think the director is at least partially at fault here because, looking at both the anime and the manga many of these characters have the most personality in their dialogue and mannerisms and it may just be that the new director doesn’t have the experience or vision to bring that aspect of their characters to life or recognize its value.

Luckily it’s not all doom and gloom.  Now that battles are underway and characters have cuts and sweat over their faces and arms, the characters no longer look even vaguely plastic.  Unfortunately I still think Kingdom 2 with it’s thicker outlines and more emphasis on shading and linework looks better – but Kingdom 3 is now looking very solid.  Kingdom 3’s art has its quirks, particularly how it seems to fade out lighter colors while overemphasizing darker colors but it’s at least been very consistently solid so far and there’s no sign of Kingdom 3 dropping back into the horrible CG of Kingdom 1.

And of course the story is as good as ever, dropping us right into one of the biggest events in the story without any kind of rehash of the earlier seasons was a great idea. Kingdom 3 cuts any waiting time and drops right into the big time, the largest battle in the story where the stakes are as high as they can be and the odds of victory are as slim as we’ve ever seen them.  I do somewhat miss the more frequent narration and directing tricks that slowed earlier seasons of Kingdom down for dramatic effect and build-up, but I can’t really complain with how the story has progressed thus far because this is arguably the most complex arc of the manga in terms of the sheer number of characters, soldiers, number of battles and so forth that need to happen.

Overall Kingdom 3 is looking fairly good and I will be along for the ride, it only really stumbles when you compare it to Kingdom 2.  And that is a shame but nothing about Kingdom 3 indicates that will fall apart or end up being a shit sequel like some other high-profile sequels to old properties.  Thanks for reading, see you in the next one.